You are here: Vented-Box Case

The Bass-Reflex or Vented-Box system maintains some physical similarities with the Closed-box case; however our reader should not skip the relative section. Rear-side radiation emitted by the loudspeaker diaphragm confronts the combination of cabinet air and vent tube. Diaphragm motion needs to overcome the reaction of enclosure air volume and the mechanical load introduced by the port or vent.

Beranek some decades ago and Thiele & Small in 1971-1973 offered more accurate models for enclosures and vents, the complexity of which has been incorporated to modern software.

What is interesting is that a new mass-spring subsystem is created in the back side of the woofer driver. This subsystem is based on enclosure compliance and vent mass. It has its own resonance frequency.

Although it is a rather complicated mechanical-acoustical model we can simplify its operation:

Thus strong pressure waves are eventually emitted by outer port's mouth only at resonance ie. at frequencies close to the characteristic resonance frequency of this subsystem. Cabinet air oscillates strongly. Mechanical impedance imposed to cone gets very high allowing for only a weak cone oscillation. It is spectacular to watch the amplitude of cone vibration as frequency changes. At resonance woofer diaphragm almost stops entirely. Vent output is maximized. The following figure illustrates how velocity of driver cone (blue curve) and air at vent's mouth (red curve) change with frequency: 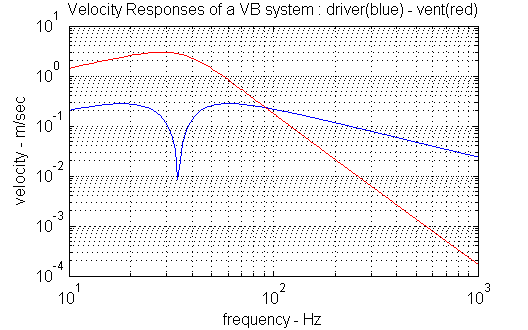 Obviously vent's output velocity is very large compared to driver cone velocity. What comes next is the investigation of SPL responses of driver and vent acting as separate acoustical sources. Overall SPL response of a VB speaker needs also to be evaluated as the (complex) sum of the separate SPL responses : 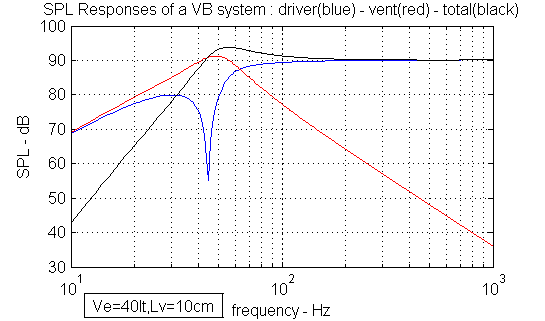 The figure above describes a VB speaker of net enclosure volume of 40lt with a vent tube 10cm long. It is simply the addition of the blue and the red responses that creates the overall black SPL response.

There are several issues raised by close investigation of such a figure:

Overall SPL response may have a peak, either strong or weak. Its cutoff frequency along with its shape can be effectively controlled by changes in enclosure volume and/or vent dimensions. Since vent diameter is usually fixed within the baffle's hole, only changes in vent length are really an option.

In the next figure a +20% increase in enclosure volume is analyzed. 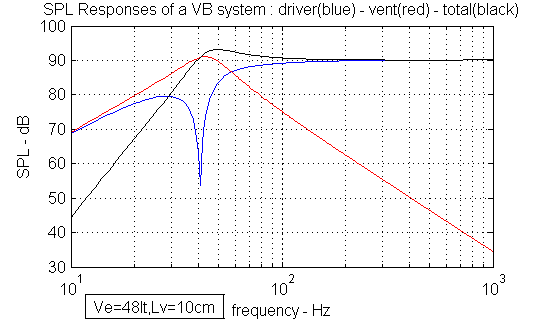 As expected resonance is relocated to a lower frequency (close to 40Hz). Overall SPL peak remains almost unchanged because the strength of vent's resonance is preserved.

Next figure illustrates what will happen if we use a longer vent tube (18cm instead of 10cm). 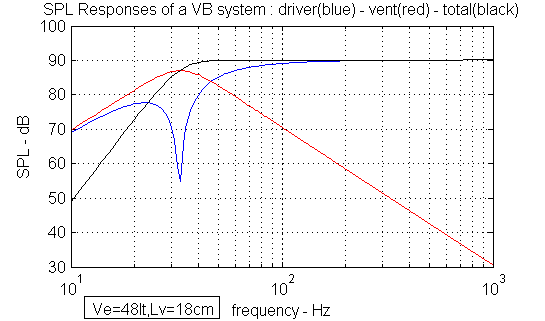 Resonance frequency decreases significantly. But what is worth noting is the drop in vent's SPL response (red curve). This drop straightens out the initial SPL peak.

-Conclusively, how do we control the vent and driver SPL responses in a VB speaker ?

It seems that we need a simulation software along with two golden rules:

-What about cone vibration amplitude in VB speakers ?

The oscillation amplitude of woofer cones in VB systems exhibits a dip at vent resonance frequency. The following figure illustrates this effect: 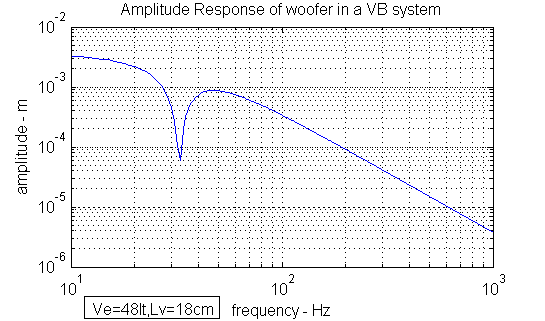 Using the special formula to calculate the compliance of the 40lt air-volume gives a Cme value of 0.54mm/N.

Applying the formula for the total compliance Cmt ends up to a lower value of 0.27mm/N.

We chose not to use an integrated formula so that we get a deeper understanding of voltages, currents, voice coil forces and oscillation amplitudes.

The same procedure applied to the VB system uses driver's suspension compliance Cms instead. This is because when cone compresses cabinet's air at very low frequencies, the latter can escape through the vent's opening. So no reaction is produced by enclosure volume at very slow frequencies in VB systems. The only 'spring' force present is that of the woofer's suspension.

In our example repeating the calculations for the VB version of our speaker system with a woofer compliance value of 0.54mm/newton (same voltage, same current, same force) will end up to a much higher peak oscillation amplitude of 3.1mm. VB systems are less protected against cone excursion at very low frequencies.