You are here: The HF Branch

It is now the turn of the high frequency (HF) acoustic branch to be studied and controlled in terms of SPL response. The associated highpass filter HPF will be treated in the same way as the LPF. We continue the example we used in the previous article. We use the same topology.

In the case of the 2nd order HPF a good set of startup values for 8 ohms tweeter drivers is this : 0.10 series resistor, 4.7uF and 0.20mH. Such a low resistor will keep the whole branch's attenuation to almost zero which will be a good starting point : 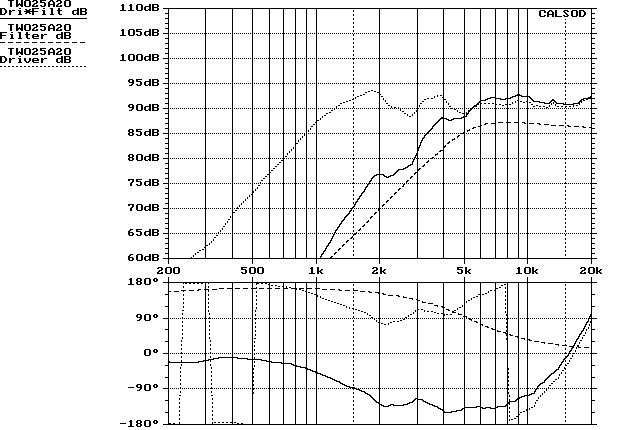 Again the solid line is the overall SPL response of the HF acoustic branch, the dotted one is the tweeter alone and the dashed one stands for the HP filter's gain referenced at 86dB. Two points are those which our eyes should focus on :

The dashed gain response of our highpass filter shows a mild resonance  ie. a frequency range with positive values. We must recall that whatever is over the 86dB(=0db for filter gain) reference level in this plots is regarded as positive and vice versa. Such a 'resonance' is usually not a good thing to have in crossover filters because the transient response of those filters to input oscillations (of such frequencies) tends to be uncontrolled and time-smeared : Output oscillations will last far more than input. Usually these resonances disappear when series resistor increases or capacitance/inductance changes.

The other thing to watch out is the -6dB frequency of the acoustic branch SPL response. As a rule we expect the SPL responses of both branches to intersect at their respective -6dB frequency points and sum up to an almost flat overall response. We say that we want acoustic branches to 'cross' each other at their -6dB points and 'add' forming a flat 'total' response. The overall process is approximate and that is why it is a golden rule of thumb to start with before making fine adjustments of component values.

To locate the -6dB frequency point (approximately) we observe the flat area (passband) of the branch's SPL response, identify its average level (somewhere around 91-92 dB) and subtract 6dB. The required 85-86 dB point is located somewhere around 3400Hz. If we have a look at the LF acoustic branch SPL response in the previous section we will notice an average passband level of 86-87 dB. So we must attenuate the HF branch more than what the small 0.10 ohm resistor does. We increase its value to 3.3 ohms and re-run the simulation software: 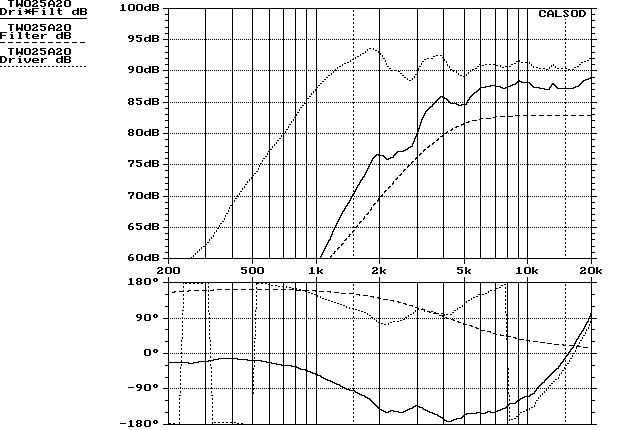 The new HF passband level is somewhere around 87-88 dB ie. 1dB more than what we want. We can let it be. Some designers prefer this small treble boost (1-2dB) because it makes their speaker projects sound 'live' provided that the listening room won't be too much reflective. In that case the average listener will not like it at all!

The new -6dB frequency point is at 3000Hz which is very high compared to the respective -6dB point of the LF branch. We choose to shift the HF branch to the left by increasing our capacitor to 8.20uF. The result is shown below: 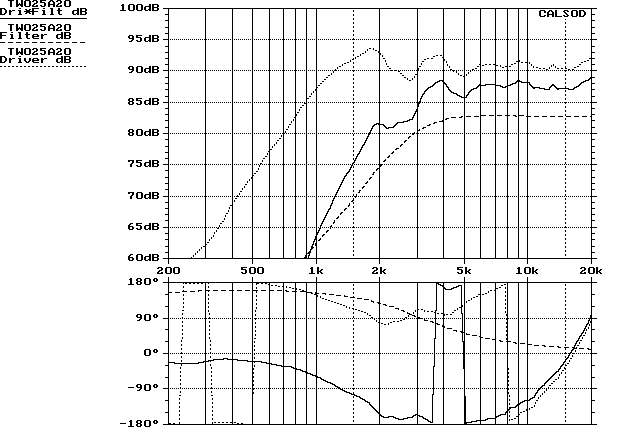 The HF branch response despite its peaks passes through the 81dB SPL point at 2000 Hz approximately. Now we are ready to attempt a summation of both acoustic branches.