You are here: Baffle Diffraction Step

There are several articles in the web explaining what Baffle Diffraction Step is and how it is integrated in loudspeaker SPL responses. Our approach will be kept as simple as possible and at the same be directed to all those practical implications that affect speaker design procedures.

-What is diffraction in sound waves ?

In general diffraction is a phenomenon associated with a wave propagating not in a straight line. If diffraction did not exist sound waves would not propagate behind obstacles. A completely silent shadow zone would be formed behind objects in the same way it is formed for visible light within an ordinary house.

An almost closed door leaving only a small slit would let the sound waves enter the room in a "straight line" sense, "illuminating" only a small portion of its volume.

We say that a sound wave 'diffracts' around the edges of an object and by that we mean that it bents around the object's boundaries and propagates in the 'shadow' zone even with a substantially attenuated pressure level.

The energy of diffracted waves is strongly frequency dependent. Low frequencies bent around objects without much attenuation. On the other hand only a small part of the energy (and pressure level) of high frequency sounds enters the shadow zone of obstacles.

-So what exactly is 'baffle diffraction step' and how is it associated with sound diffraction effect ?

Now imagine a listening point in front of a speaker (usually somewhere close to tweeter axis). Let us use sound "rays" instead of abstract waves to see what happens around a typical speaker enclosure.

-What is so important in the fact that diffracted sound waves propagate sideways and behind a speaker's enclosure ? What is the meaning of diffraction "step" anyway ?

We can easily understand that listening points in front of a speaker receive direct sound field and attenuated diffracted field with some delay. Wave addition of these sound fields is complex and produces interference: some frequencies are amplified (total SPL exhibits local peaks) and some other cancel out (total SPL features local dips).

We can also understand that diffraction draws energy from the direct field and moves it to the space located sideways and behind a speaker's cabinet. Since diffraction is stronger at lower frequencies we get a series of interesting results :

All loudspeaker drivers are measured on a very large baffle board (with weak diffraction effects) so that their properties and SPL responses are recorded and presented by the manufacturer without any dependence on final speaker geometry and the "end-user environment".

Loudspeakers on such a "baffle" radiate in what we call "half space" ( a semisphere in front of the baffle). At such circumstances loudspeaker passbands exhibit almost flat SPL responses (usually around 87-90 dB) with fluctuations mainly due to cone breakup etc.

As a result when we examine ordinary speakers at a listening point in front of their baffle, we find that a loudspeaker's SPL at very low frequencies has dropped down by as much as 50% compared to manufacturer datasheets (-6dB drop) while very high frequencies keep their original intensity level (0 db change). All frequencies in between exhibit interference with peaks and dips. This drop is what was named "Baffle Diffraction Step" or "BDS".

A careful study of the above BDS response plot verifies the existence of the 6db step between very high and very low frequencies. This response is to be combined with the SPL response of a loudspeaker driver measured by its manufacturer on a very large baffle. This holds either for tweeters or woofers.

In the case of woofers BDS attenuates their bass response and adds anomalies in the mid-frequency range.

This speaker carries two 6.5'' woofer drivers and an Aluminum 1'' dome tweeter by SEAS mounted on a relatively large baffle area: 24.4 cm width x 112.4 cm height. Manufacturer's SPL response for this tweeter driver on a very large baffle is very smooth up to dome-breakup above 20kHz.

Picture below is a snapshot of the "Edge" program running under Microsoft (TM) Windows 7: 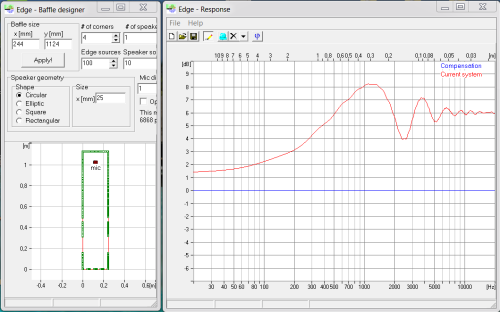 Note the 1200Hz/3800Hz peaks and the 2500Hz dip. Also note the attenuation rate in the frequency range 250-500Hz which is 2.5dB/octave approximately. It is very interesting to compare these results to measured SPL response (that integrates the manufacturer's smooth SPL response and the BDS plot) found below: 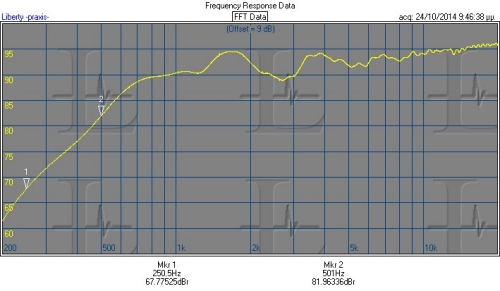 According to Electroacoustics a tweeter must have a 12dB/octave roll-off rate at low frequencies. If we add the 2.5dB/octave introduced by BDS we end up with a total rate of 14.5dB/octave which can be easily confirmed by measurement markers at 250-500Hz. The 3.8kHz peak can also be observed. However the 1000 to 3000Hz range is not as accurately simulated as expected. BDS simulation programs are usually confined to first-order-diffraction computation with the four baffle-edges only acting as diffraction sources; the rest of cabinet sides and edges are neglected (higher-order-diffraction). As a consequence results lose accuracy below 1-2kHz. Such programs rarely give the -6dB drop exactly at very low frequencies.

An additional source of simulation error is the driver behaviour itself. Loudspeaker driver emits off-axis radiation that "drives" diffracted sound-field. In the previous tutorial article on directivity and diaphragm rigidity we explained that most textbooks and engineers use the rule of rigid piston to model sound radiation either on or off-axis. This is conventionally used also by simulation software dedicated to BDS.

The truth is that loudspeaker diaphragm's behaviour deviates from both ideas: it acts as a cone (or dome) that is not rigid (ie. it does not vibrate with uniform velocity). Even if we assume rigidity for woofers and tweeters below 2000Hz, their piston-like directivity needs correction. In that sense BDS simulation programs use incorrect pressure level radiated at 90 degrees off-axis and get wrong diffraction computation in all steps that follow this assumption. Surely a more detailed discussion could clarify all aspects of this issue at various frequency ranges but this is outside the scope of this article.

-What is the impact of BDS on speaker performance and its design process ?

BDS decreases bass response of woofer drivers below 400Hz by several dBs. At the same time measurement systems not operating in very large halls of more than 100 m2 fail to provide accurate SPL curves below 300-400Hz. These two effects leave the design engineer in complete darkness. If the passband level of a woofer driver in this range of frequencies is unknown then what sort of attenuation should the crossover network's amplitude response impose at frequencies above 400Hz ?

At the same time BDS distorts SPL curves of loudspeaker drivers of all types. Lab measurements provide an accurate picture of final driver SPL curves above 400Hz and design process is not compromised.

-What can be done about BDS during design procedure ?

As theory implies BDS imposes a -6dB loss as we get close to 0Hz. Speakers having a very small baffle area exhibit this limiting value at relatively high frequencies, let us say at 200Hz. Modern music bass instruments (80-120Hz) and human voices at mid and high frequency spectrum create a catastrophic imbalance.

As baffle area increases the BDS attenuation of these bass frequencies gets milder (-3 to -4 dB). If we compare speakers of equal baffle area, things get better for those with increased depth (ie. cabinet volume). However aesthetic rules are also decisive in cabinet design and should receive proper attention.

Another factor that controls BDS is the degree of directivity which a loudspeaker driver presents for 90 degrees' off axis radiation, because it is the latter that eventually creates diffraction. 3/4'' tweeters radiate strongly at this angle, create stronger diffraction and end up with stronger SPL anomalies in their passband.

In a similar sense large-diameter (directive) woofers present smoother SPL responses at higher frequencies. Talking about equivalent woofer configurations, there may be several reasons for using multiple 5'' instead of one 6.5'' woofer driver but it is the latter that will provide a clear mid-frequency range with moderate SPL fluctuations.