You are here: Acoustic Summation

At this point it is essential to understand that the last two sections dealt with the task of shaping the SPL response of the acoustic branches separately in order to gain experience. We presented second order filter topologies for a two way speaker system. In this section we will start from the point where we left the acoustic branches and their components.

The last set of components of our filters is the following :

Note the double impedance compensation on the tweeter side.

We let our simulation software run for a total SPL response and get a devastating result : 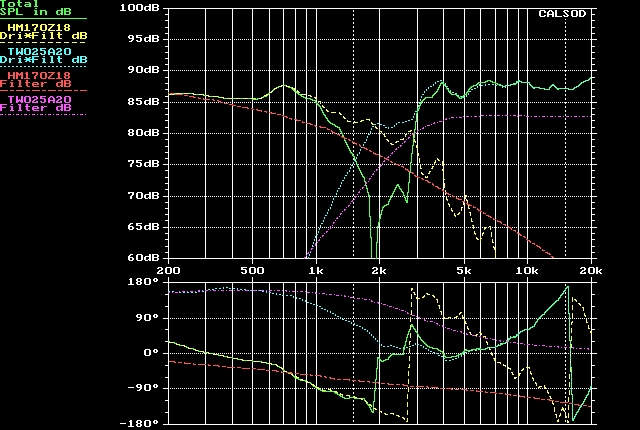 Obviously the two branches cancel each other in the crossover area. For this we simply invert the polarity of our tweeter to introduce an additional +180 degrees phase shift to the associated HF acoustic branch. The result is rewarding: 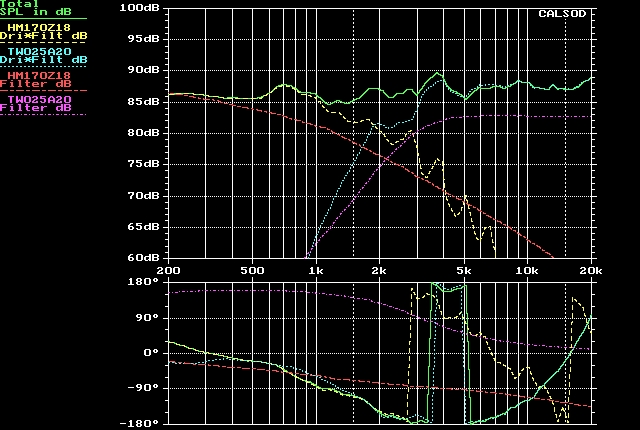 To cut the 3800Hz peak we decide to shift the lowpass filter cutoff to the left by increasing our (forgotten) 1uF capacitor C1 to 8.2uF. We also apply a little more attenuation to the HF branch by increasing a bit the series resistor R2(=3.30 ohms) of the highpass filter to 3.90 Ohms. The overall SPL response improves a lot: 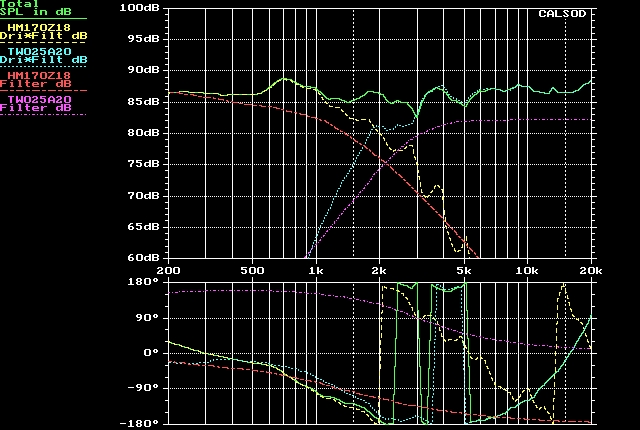 However good this design seems to be we can't tolerate the fact that crossover frequency is too low, only 2100 to 2200Hz. The tweeter's thermal endurance is generally questionable at high power levels when crossover frequency becomes lower than 2.5kHz. Classical music is not expected to drive tweeter's temperature beyond the limit but who can promise that it will be the only kind of music our speaker will have to reproduce.

In such a general discussion over the thermal dissipation limits of tweeters we refer to power levels that may induce distortion but will not burn the woofer driver. At such power levels we want the tweeter driver not to be destroyed too. Thus we generally seek crossover frequencies above 2.5kHz.

To implement this rule to this speaker project we try to shift crossover frequency to the right at 3000Hz approximately. Whatever the changes we make to our lowpass filter we realize that we can not have both the mild 500Hz and a steep rolloff above 2000Hz.

We increase the order of our lowpass filter (now 3rd order) by adding a series inductor (L3) just before the woofer driver and its impedance compensation subcircuit.

We choose a startup value for L3=1mH and shift the HF branch to the right by decreasing the highpass capacitor C2 and inductor L2:

We get an LPF gain with very steep cutoff above 2500Hz as planned but with an unwanted resonance: 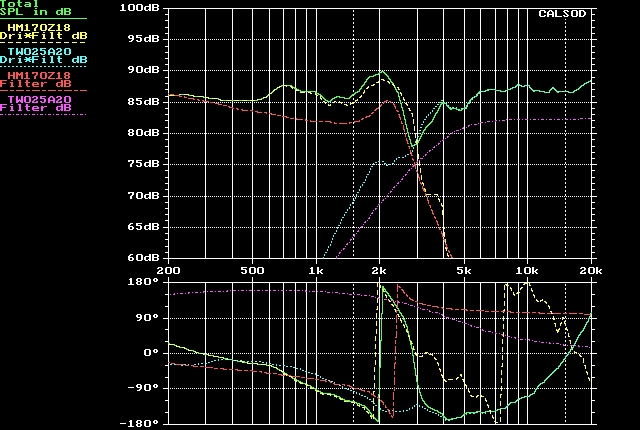 The HF branch has shifted to the right as planned so we won't touch it right now. The resonance peaks formed at 3rd-order lowpass filters just before cutoff can be damped effectively by lowering the second inductor L3. We decrease its 1mH value to 0.6mH: 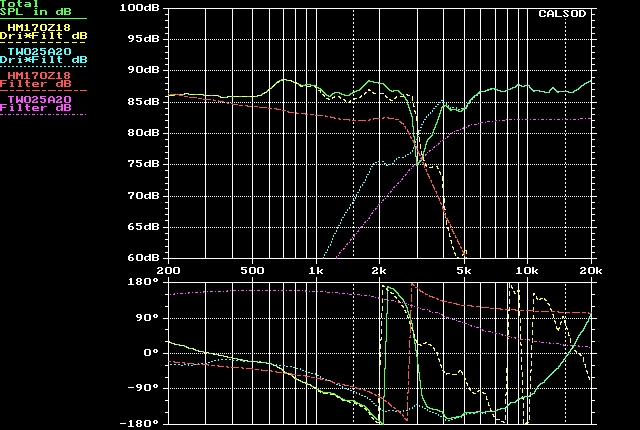 Our only complaint now is the notch at crossover frequency due to acoustic branch cancellation. We reverse tweeter polarity again: 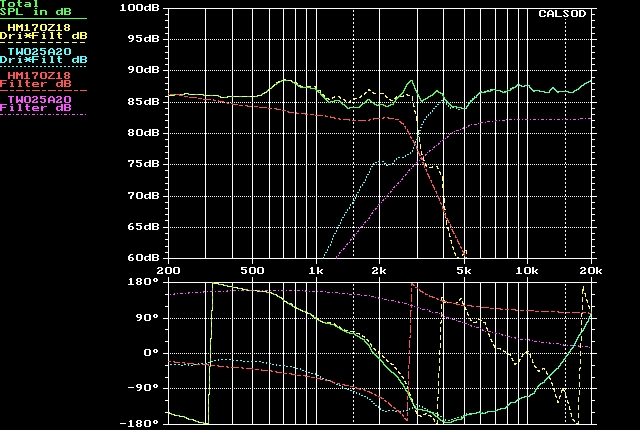 At last the SPL response of our crossover network has reached our design targets to a quite acceptable extent. Crossover frequency is somewhere abobe 3kHz and SPL fluctuation above 200Hz is +/-2dB which is widely regarded as very low. We finalize the crossover component values:

Of course one could proceed to further adjustments that would trim the 2900Hz peak and re-position (ie. move upwards or downwards) the mid and high SPL levels with respect to low frequency level of 86dB.

This is an issue to be addressed in next sections. At the moment we prefer checking the speaker's input impedance just to make sure that no low values occur. We usually check frequencies above 200Hz where the crossover network controls impedance. Below 200Hz it is the woofers along with the enclosure and the vent that decide speaker impedance: 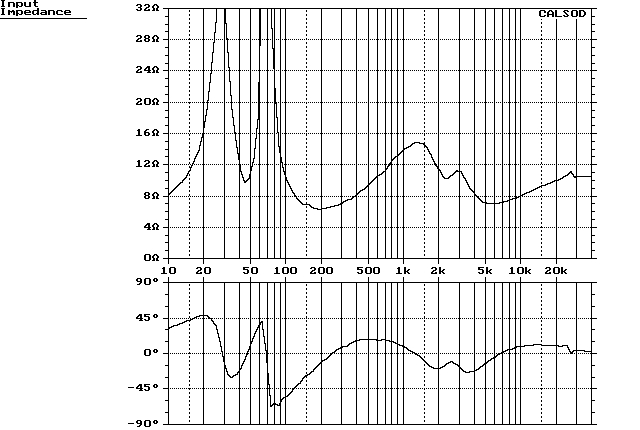 Below 200Hz our simulation software simply uses woofer impedance measurements which reflect enclosure and vent resonances : our lowpass filter components are transparent and the highpass filter behaves as a very high resistance ie as a switched off circuit.

At high frequencies the lowpass filter switches off introducing very high resistance with L1 and L3 inductors while the highpass filter becomes transparent: now the speaker's impedance equals that of the tweeter driver as compensated by the relative subcircuits we designed.

In 8 ohms speaker systems we want the impedance plot above 200Hz not to have strong peaks and dips above 16 ohms and below 5 ohms. Impedance phase (above 200Hz) is a reliable indication of our speaker's inductive or capacitive nature. Amplifiers love driving as resistive as possible speaker loads. Especially cheap amplifiers! This is an extra issue to consider in crossover design.

Anyway, impedance phase should swing (above 200Hz) not outside the +/-30 degrees zone.