You are here: Closed-Box Case

This type of suspension was the major one in the 50s,60 and 70s. USA companies were the leading force of speaker industry with several 'best buy' CB realizations. In a previous section we asserted that rear-side radiation actually propagates into the enclosure's volume. The question is how the cabinet's air reacts to diaphragm motion.

-Could we summarize the quantitative effects of enclosure's air volume on woofer cone mass-spring system and its frequency responses ?

As we said enclosure air in a CB speaker reacts as a compressible fluid. It interacts with the basic mass-spring system of the woofer's suspension by adding stiffness. In loudspeakers we prefer working with compliance instead of stiffness. Since compliance is the inverse of stiffness we understand that additivity holds for inverse compliance coefficients. If Cms is the spider compliance of a woofer and Cme the air-volume compliance, the resulting total compliance of the CB speaker will be:

As in quality factors, combining two compliance values with the expression above will result in a lower total value. For example let us take a small woofer with Cms=0.8mm/N and mount it on a cabinet the air of which exhibit an equal compliance value Cme=0.8mm/N. The overall compliance will be much lower; half of these values : Cmt=0.4mm/N. This means that woofer diaphragm will confront stiffer forces throughout its oscillatory motion.

As we said before the resonance frequency fs for the unmounted loudspeaker relates to Mmt and Cms. It is inversely proportional to the square root of both quantities: total moving mass and suspension compliance:

When this driver is mounted on a closed box a new resonance frequency fo is created for the oscillating loudspeaker diaphragm (Cmt instead of Cms):

Since total compliance Cmt is now lower than Cms we understand that the new resonance frequency fo is higher than driver's fs.

-Could we have an example ?

An 8'' woofer driver with fs=35Hz  is mounted in a CB enclosure of 40lt. Driver's compliance is Cms=0.54mm/N. If we use a special formula to calculate the compliance of the 40lt air-volume we get the following result:

This woofer has a typical cone area of 230cm2 which gives an air volume compliance Cme=0.54mm/N. The overall compliance Cmt is lower (0.27mm/N) a fact that increases resonance frequency to 50Hz as depicted in the following figure: 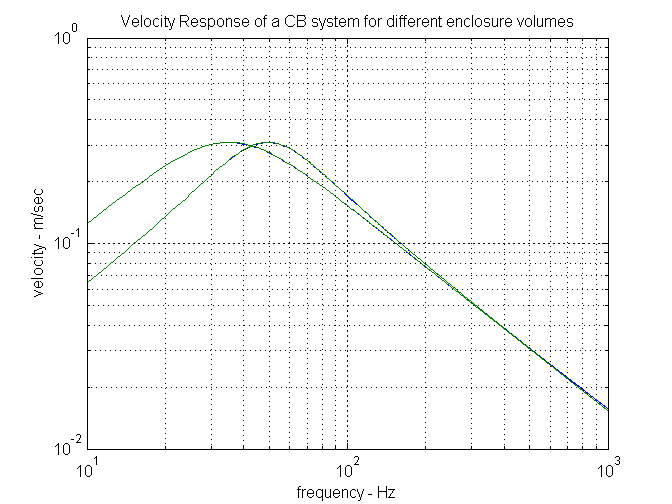 The leftmost curve relates to unmounted woofer (fs=35Hz) while the rightmost curve belongs to the final CB system (fo=50Hz).

-Could we have a handy formula to evaluate the final CB system resonance freq.fo ?

In this example with driver's Cms to equal the air-volume's compliance Cme, the expression in the square root equals two. thenge we get fo/fs to be 1.41. This means that CB resonance fo is 41% above the driver's fs=35Hz ie. at 50Hz approximately.  A close investigation of last figure will verify the results.

-Why maximum velocity of the final CB system does not change ?

-What about the SPL response of the final CB system ?

Surely the pressure response of a woofer driver changes when the latter gets mounted on a CB system: 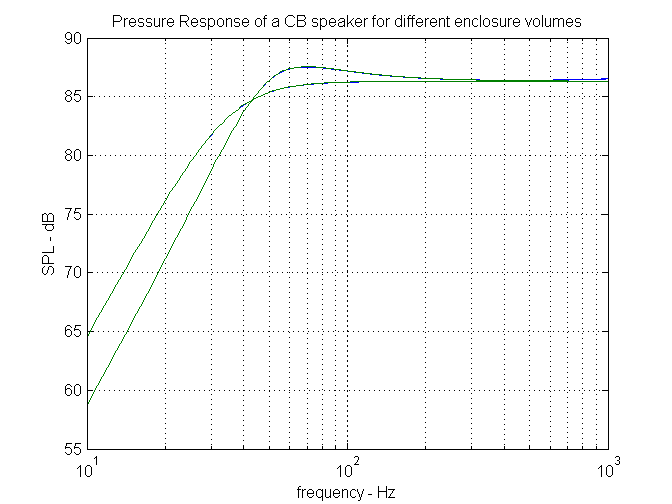 This figure addresses the SPL response of 8'' woofer driver mentioned in the previous example. The leftmost curve stands for the driver alone (no air-volume, fs=35Hz) while the rightmost depicts the final CB system's response for enclosure volume of 40lt (fo=50Hz).

Except for SPL response shifting to higher frequencies we observe that damping in the final CB system is now less efficient to control the higher resonance frequency. A resonance peak is now formed. Quality factor of the CB system is obviously worse compared to the woofer driver alone.

Generally speaking a CB system has an increased quality factor compared to loudspeaker alone. This is due to frequency up-shifting. When designing CB systems we must take into account the resulting quality factor value:

In our example the 8'' woofer driver has a Qts value of 0.71 approximately (very good in terms of damping). However mounting it on a 40lt CB design increases resonance frequency to 50Hz at which damping is less efficient and the quality factor increases to Qt=1.00.

This new value is somewhat underdamped producing a small SPL resonance peak. Even if we take into account the very small mechanical damping offered by enclosure's air (Qa=10) the final CB system (Qtc) will still be underdamped:

When the overall quality factor Qtc is higher than desired two actions can be selected:

-Could we elaborate on the last choice ? 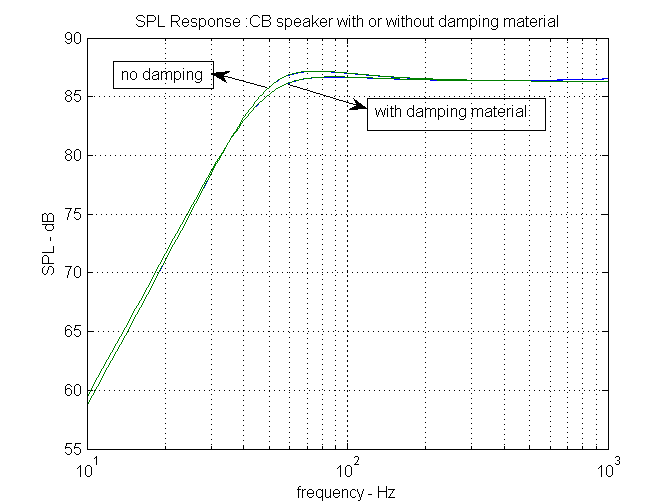 -Is Q shifting the only consequence of filling a CB speaker with sound absorbing material ?

Older Electroacoustics' research states that sound propagation speed is reduced in spaces filled with such material by a factor of 10% approximately. This makes filled volume 'seem' larger than it really is by twice the same factor. In our example a CB cabinet of 40lt filled with such a material becomes acoustically equivalent to 48lt!

All these aspects of a CB system are covered from a design point of view in the relative section of another tutorial article : the design framework.

Generally speaking no. A resonance frequency coincides with the cutoff (-3dB) frequency only at the special case of critical damping Q=0.707. We need further formulation for computing the cutoff frequency. Such an formulation is offered in the previously mentioned tutorial article on design framework.

-How much power in Watts can a CB design withstand before woofer exceeds its maximum cone excursion limit ? 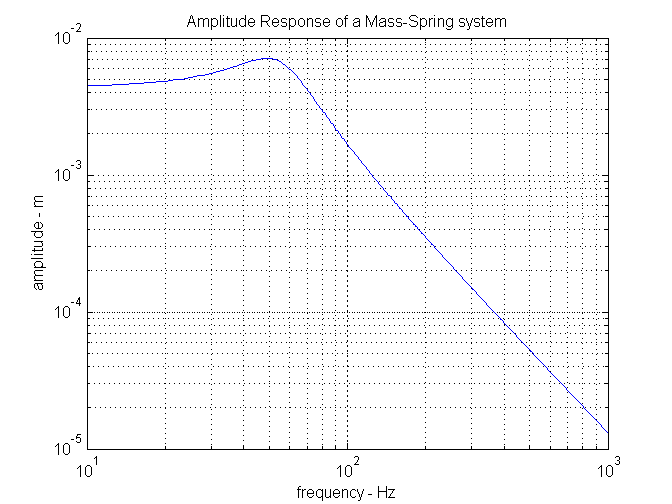 That is why the most dangerous signal frequencies for CB speakers lie in the range zero to resonance fo. In this case amplitude varies from 4.5mm to 7mm for 1 Watt input in this frequency range. The CB design in this figure features a rather underdamped resonance producing a peak around resonance. Another rule in CB oscillation amplitudes is that less volume leads to less cone excursion. 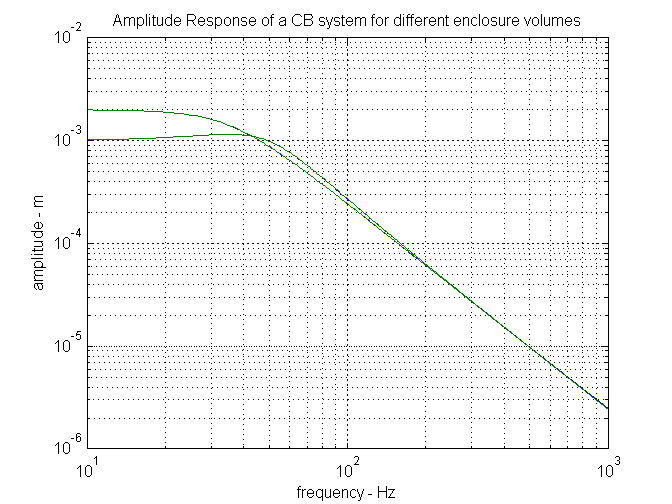 We know that this plot has been evaluated for an electrical input of 2.83 Volt rms (1 Watt for 8 Ohm speakers). Amplitude values in such simulations describe rms amplitudes not peak values. To find the peak value we simply take the rms and multiply by the square root of two.

In this case an rms value of 2mm corresponds to a peak cone excursion of 2.83mm in the 'fatal' range 0-20Hz. We also know that maximum acceptable cone excursion for this driver is 5.5mm peak.

Thus we only need a division to reveal that our 5.5mm peak limit will be reached as soon as we double input voltage. In this case 5.66 Volts rms (4Watt) below 20Hz will stretch our cone suspension to its limits.